In which I finish some hated socks

For the past few weeks, I’ve been working furiously on these socks, and declaring that I hate them to anyone who will listen.

You see, a while back my LYS coworker Neal and I devised a trade. She would knit me the Damask Mittens from Fall 2013 Jane Austen Knits, and I would knit her the Wendel socks. The mittens were handed over ages ago, but I just hated knitting the socks. 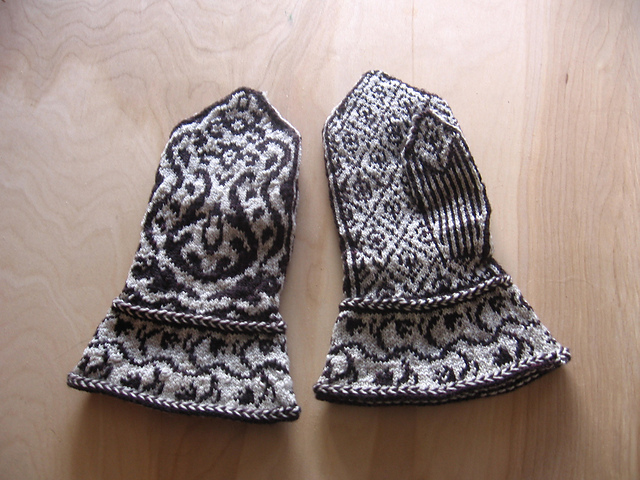 But, you see, the mittens were not without annoyance. Although modeled by an adult, they were sized for a child. The gauge was ridiculous. And Neal adjusted the pattern and knit them for me. But try as I might to knit the Wendel socks, they fell into a category of knitting that I really don’t like. For a while I considered asking her to pick a different pattern, but after she knit those mittens I figured that wasn’t really fair. Lately I started taking the socks as my “travel knitting” to force myself to work on them.

I’ve said it before, but I basically knit two types of projects.

This pattern fell somewhere in the middle – fiddly and certainly not easy, but not all that impressive. Every stitch was a purl, a twisted knit, or a decrease. (OK, the bottom of the foot is plain stockinette.)

And then when I got to the toe, it all got confusing. The instructions weren’t very clear, and the designer used the term “knit” to mean “work in pattern”, which results in about 1/3 of the finished projects on Ravelry having a plain knit toe. But I figured it out (and then later figured out that there is a note about it in the Ravelry pattern notes). But seriously, update your pattern PDF, dude!

In any case, they’re done. Finally.